Designed as walking tour of the town, The Brink of the Future invited audiences to step into a future 100 years from now to journey with Pipp and her robot friend Caleb as they battled to save Wisbech’s digital memory from draining into the Fens. 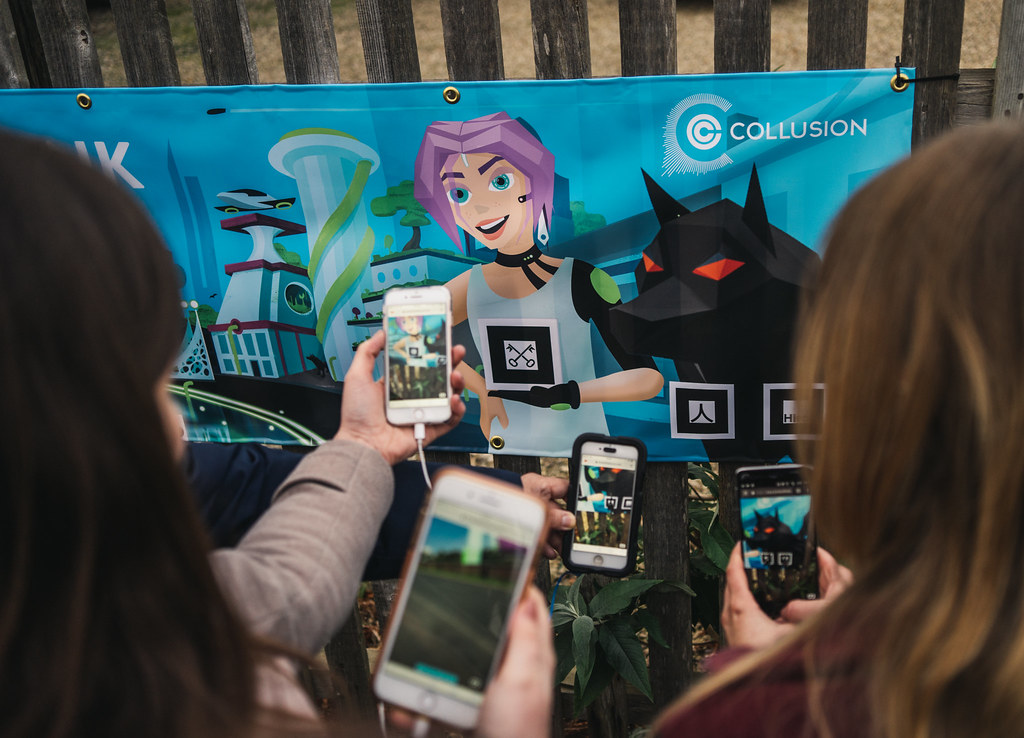 Audiences experienced the project by strolling along the route with their smartphones to hear and see the story overlaid onto the townscape.

The story was developed by writer Lucy Sheerman based on local stories and voices, gathered through a series of workshops. A local team of artists and technologists came together to turn the story into an augmented reality experience, including artist Lee Mason, who created the visuals, developer Mark Richardson from TinFish Creative, who led on animating and integrating the various assets, and audio engineer Sam Loose, who helped record the narrative.

The Brink was built as a web app using augmented reality and open source technology. It was the first app to animate augments created using Google Blocks, which can be accessed on multiple devices, from a basic MP3 player to Android smartphones and iPhones with i0S 11. 360° photography was captured on location and edited within virtual reality using Google TiltBrush, overlaying the real view of the North Brink with the story’s future vision of the area. Each part of the story was connected to a particular zone on the route using GPS technology, triggered when participants walked into the zone.

The resulting augmented reality experience was an instant hit with visitors, who were also able to use Google Cardboard headsets to enjoy The Brink over the launch weekend.

Lucy Sheerman is a Cambridge-based writer and author. Her recent work includes Even You Song, created in collaboration with Bettina Furnée using interview material drawn from couples who were asked whether they could travel to the moon together. Lucy has written two plays, including a collaboration with the Apollo astronaut and poet Alfred Worden.

Based in Peterborough, Lee Mason works and teaches in a range of virtual reality art programs on multiple platforms. While his background is in digital illustration, Lee’s portfolio also includes digital sculpting and large-scale mural work.

Jamie Gledhill is an East Anglia–based artist working at the intersection of audiovisual art and interface experimentation.

Sam Loose is a sound engineer.

Ben Prest is a Wisbech-based photographer whose work has been internationally published.