Taking place over four months beginning May 2017, Collusion presented the outcomes of our R&D Challenge over one weekend in September 2017: a showcase of four experimental, interactive, large-sale site-specific projections in King’s Lynn town centre created by teams of local creatives. 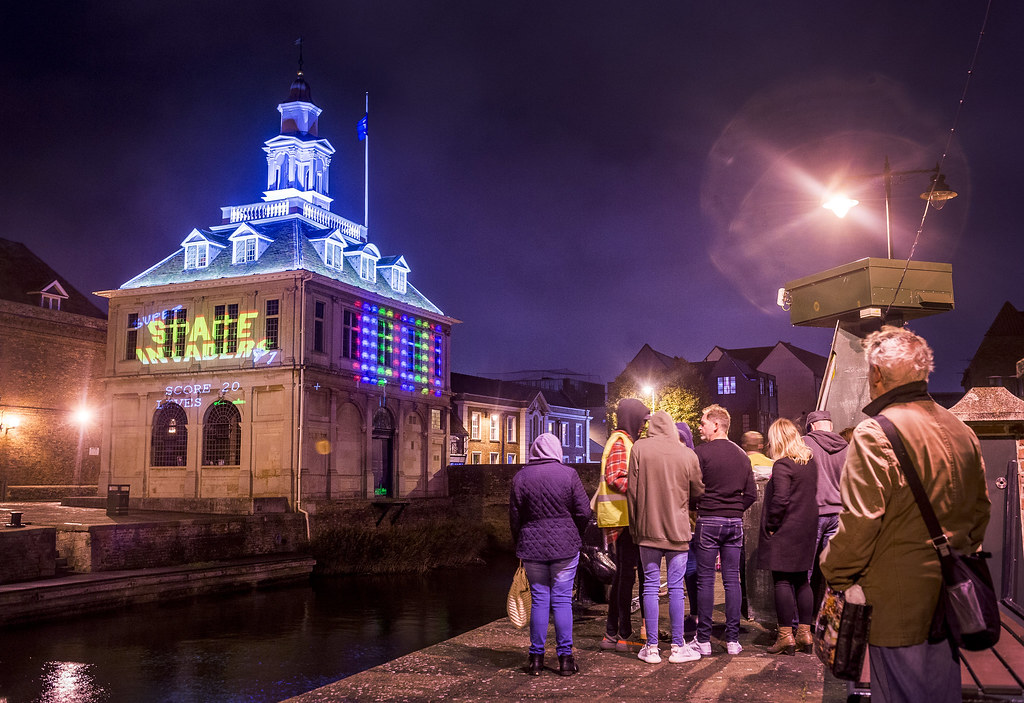 Sounds, images, data, film and archives featured in the prototype projects, created by four teams of creatives over a period of four months, supported by Collusion with a series of artist-led masterclasses.

FLOW by team BellArtLabs used archive audio and film from the region to create a multimedia art presentation linking the past, present and future of King’s Lynn, revealing the story of people’s lived experiences. It was shown at King’s Lynn Art Centre.

Assemble by team Payne Hurt featured a three-player audio sequencer using sounds and imagery taken from in and around King’s Lynn, and was shown in the Tuesday Market Place. The public interacted with the project using an old-school arcade game–type controller.

Voyager by team Elements was a promenade project involving an AI system which scanned historical data from medieval manuscripts and physical graffiti to biological data to piece together a love story over time and discover its conscious self. It was shown on Greyfriars Tower.

At the Custom House, Moment by team FishGills brought retro gaming to the heart of the town, allowing people to use a simple controller system to play classics such as Pac-Man and Space Invaders.

Around 600 people attended the show over three nights. Audiences described it as “epic”, “fascinating”, “immersive” and “original”. It successfully attracted non-arts audiences and brought cultural tourists into town. The success of this project provided the basis for REVEAL.

Oliver Payne is a sound artist, designer and musician interested in improvisation. He creates sound and music for installation, filmmakers and broadcasters.

Will Hurt is a visual artist and describes himself as an artist working with computers.

Marcus Romer is a director, producer, playwright, and filmmaker.

Gavin Toomey is a film director, writer and producer of drama, promo and documentary films.